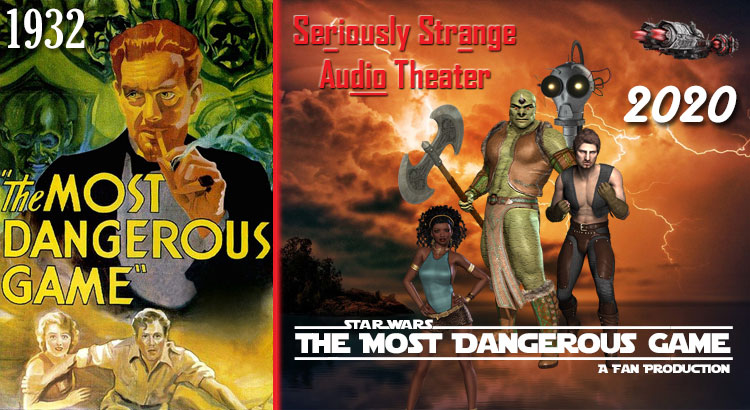 Revisiting Some Old Favorites In Episodes 3 and 4

We’re thrilled to announce the release of the third and fourth episodes of Seriously Strange Audio Theater — “Shout, Don’t Talk” and “The Most Dangerous Game.”

Let’s get into the backstory.

When Sharon and I joined forces to start Seriously Strange Audio Theater, one of the first things we discussed was our script pipeline. Without scripts, we would have nothing to produce. Sharon knew some writers who might be interested in submitting plays to the troupe, but none of those scripts were finished. To get going right away, we would need some production-ready scripts.

Fortunately, I have a big backlog of scripts from my prior experience as a radio drama writer, director, and producer in San Francisco. So, we decided that our first two pilot episodes would be remakes: “Message From God” (which I originally wrote and produced for Crunchy Frog Comedy) and “Table for One” (which I first produced with Shoestring Radio Theatre from a script by my friend Nico Pemantle).

These two scripts would let us prove to ourselves that we could produce credible audio theater on a minuscule budget — i.e. the first two episodes would be our “proof of concept.” They were simple productions, not requiring overly complicated music or sound effects. Plus, Sharon thought they were funny.

After finishing production on our pilot episodes, the question was what to do next. Since founding Seriously Strange Audio Theater, we had reviewed a few submissions from outside writers, but we had not found anything that jumped out at us.

In a perfect world, Sharon or I would write some fresh comedy, sci-fi, or drama specifically for the troupe. Unfortunately, this is easier said than done. You can’t force creativity or schedule fits of inspiration.

Plus, I’ll let you in on a little secret. Writers are lazy. I find it much easier to rework something I’ve already written than to come up with something completely new. This is why I’ve mined my past yet again for episodes 3 and 4.

While looking over my previous works and unfinished scripts, I identified two good candidates for Seriously Strange Audio Theater. Each of the scripts and resulting episodes represents both something old … and something new.

“Shout, Don’t Talk” is a comedy short I wrote several years ago, but one which I had never previously produced. The sketch features the latest misadventure of my recurring characters, Man and Dude.

The two Southern California airheads previously appeared on Shoestring Radio Theatre in several comedy sketches and one full-length play. My favorites were “Run, Don’t Walk” about their inability to agree on a movie to watch and “Fall, Don’t Splat” which chronicles their skydiving expedition.

In their Seriously Strange Audio Theater debut, Man and Dude (who are reminiscent of Bill & Ted and Wayne & Garth) finally visit their college campus after deciding to go to class for the first time.

“The Most Dangerous Game” is a milestone — with a runtime of over 50 minutes, it’s the first full-length play that Sharon and I have produced for Seriously Strange Audio Theater.

The episode is my second adaptation of the classic public domain movie from 1932. The influential film is a survival thriller in which a famous big game hunter gets stranded on a small island with a like-minded hunting fanatic.

Second adaptation? Correct — this is not my first rodeo when it comes to “The Most Dangerous Game.” Let me explain…

In the late 1990s, while searching a list of public domain movies for a title to adapt for Shoestring Radio Theatre, “The Most Dangerous Game” caught my eye. The name sounded familiar.

I must have seen the movie at least once on TV while growing up in the Bay Area. I watched it again on VHS and concluded that the story would make a fine radio drama, even though the visual action sequences in the third act would be challenging to convey.

I painstakingly transcribed the movie and then wrote an adaptation for radio. I tweaked the dialogue and added sound effects and music cues to translate the material from a visual medium to a purely audio one.

After three rehearsals, a recording session, and post-production, we had created an entertaining radio drama, and I was happy with the finished product. My Shoestring adaptation was pretty faithful to the original movie and reflects its 1930s sensibilities.

At first, I dismissed the idea of producing “The Most Dangerous Game” again for Seriously Strange Audio Theater since I adamantly do not want the troupe to become a remake factory for my earlier works. Plus, the 1930s setting and tone are not really on-brand for us.

Then I found some old notes on my computer about an idea I had for a science-fiction remake of “The Most Dangerous Game.” I wasn’t excited about the particulars of that idea anymore (which involved human realistic androids and seemed too similar to current TV dramas, Westworld and Humans). Even so, the wheels in my brain started spinning again about a sci-fi version of the story.

Finally, a lightning bolt hit me! Wouldn’t it be cool to do a sci-fi remake with planets, characters, creatures, and weapons exclusively from Star Wars canon?

Could we mash up “The Most Dangerous Game” with the extended Star Wars universe to make our own fan production? How much fun that would be!

This idea lit a fire under me. I have some experience writing Star Trek fan fiction, but I had never tackled Star Wars. (I grew up as a fan of both franchises, having seen A New Hope at the Coronet Theater in San Francisco at the impressionable age of nine.)

I quickly became obsessed with researching Star Wars references on Wookieepedia. To my surprise, I found two characters (Johhar Kessen and Garnac) who serendipitously matched up well to the hero and villain (Robert Rainsford and Count Zaroff) in “The Most Dangerous Game.” After that, everything fell into place, as I found plenty of Star Wars weapons and creatures to insert into the classic story of hunter and hunted.

Sharon was instrumental in the editing phase of my new adaptation, and she had several astute suggestions about how to modernize the characters. We continued to tweak the script all the way through rehearsals and right up until the recording.

On reflection, I’d go even further and say that Sharon was the unsung hero of the entire project!

First, during pre-production, she single-handedly ran the casting calls while I was traveling. This process included a ton of coordination with actors — e.g. fielding questions and collecting recorded auditions.

Then, after our tremendous cast had rehearsed (online and in person) and recorded the dialogue (at the Lincoln, CA home studio of D.Michaels), Sharon started post-production — i.e. the painstaking process of editing, mixing and sound design. Sharon did most of the heavy lifting, with D.Michaels assisting her on some of the more complex sound effects.

The first time I heard their ##### action sequence I nearly fell out of my chair (sorry, no spoilers here). Sharon’s ear for audio perfection really amped up the impact of the play.

“The Most Dangerous Game” is truly a labor of love. Our humble troupe operates on a micro budget with a cast and crew of volunteers. We hope you enjoy the fruit of our blood, sweat, tears … and laughter!

Now that we’ve published episodes 3 and 4, what’s next on my writing horizon?

Well, even after two different radio adaptations, it turns out that I’m not quite done with “The Most Dangerous Game.” After translating the source material into a science-fiction audio drama, I had an epiphany. Why not get even more return on my time investment by adapting my audio theater script back into a … wait for it … movie!

My screenplay — now with the working title “The Ultimate Game” — is still full of spaceships, aliens, laser rifles, and droids, but it severs all ties with Star Wars canon (for obvious intellectual property rights reasons). I’ve expanded the storyline, leveled up the action, and further developed the characters to the point where the movie version of my story would be substantially different from the audio production.

You can view the logline for the script and view accolades for the project on my Coverfly profile.

After you take a listen, we’d love to hear your feedback on episodes 3 and 4 and welcome you to comment immediately below, on our Episodes page, or on our YouTube channel.